Why do we do this?

Many schools do not yet offer appropriate computing classes, and curricula that do exist can be patchy. The technology industry is an ever growing one, and at the moment there are more software engineering (and similar) jobs in world than there are people qualified to fill them. It would be terrible if gifted and enthusiastic young people were deterred from pursuing computing qualifications and roles because they were not aware of the opportunities available. We feel that this is too important and urgent to wait for schools to catch up.

But learning to code doesn’t only qualify you to be a coder. As our world becomes increasingly technologically-oriented, understanding the process of creating the software that powers our daily lives becomes crucial for everyone. Becoming an empowered digital citizen — or professional in another industry — allows people to navigate their rights and responsibilities and make informed decisions about the products and services they use, or provide to others.

We think technology can help us towards a better world, but only if future generations understand the opportunities (and risks) it brings and the impact it can have.

The full roster of regular Prewired attendees comprises around 40 young people. In a typical evening session, we will host around 25 regulars and another handful who are new or who drop in more occasionally. Running Prewired sessions on a regular basis has only been made possible with the voluntary support of a core group of around half a dozen dedicated mentors, drawn from students at Edinburgh, Napier and Heriot Watt Universities; independent developers; and by staff from local tech companies.

Prewired became a Scottish Charity (SC047780) in September 2017. The Board of Trustees currently has the following members:

The University of Edinburgh’s School of Informatics first provided a local centre for the Young Rewired State annual week-long Festival of Code in 2012. In 2013, we entered three teams into the final competition of the Festival of Code and although they didn’t win any prizes, they did brilliantly well. This experience, and the enthusiasm, knowledge and ideas of the participants, inspired a group of us — Ewan Klein, Freda O’Byrne, Amy Guy, Kit Barnes and Stuart Anderson — to pursue longer-term means of encouraging young people to engage with programming and related activities in Edinburgh.

Thus, Prewired was born, with these objectives:

The Prewired launch was held on the morning of 16th October 2013, in the University of Edinburgh’s Informatics Forum. Thirty eight young people between the ages of 4 and 18 attended, while 15 mentors—university students, staff and local industry professionals—came along to help. Following on from the launch, we held Prewired on a biweekly basis on Wednesday evenings in one of the School of Informatics computing labs in Appleton Tower. Despite minimal advertising, a devoted cohort of young people attended during 2013-14 on a regular basis, often accompanied by a parent, with numbers consistently in the 20-30 range.

In spring 2014, Prewired became affiliated with CodorDojo, part of a global collaboration that provides free coding clubs for young people.

In January 2015, faced with the imminent unavailability of Appleton Tower lab space due to refurbishment works, Prewired moved location to CodeBase, a UK-leading tech incubator based in central Edinburgh, and due to the high level of demand from participants, began offering sessions on weekly basis. One benefit of the move was that staff from tech companies housed in CodeBase have also started to offer mentoring support. 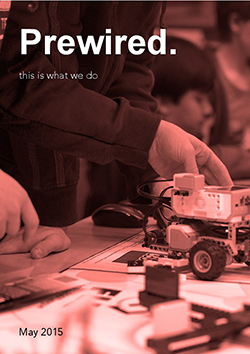 To find out more about how we’ve developed and what we’ve been doing, read our first Prewired report.